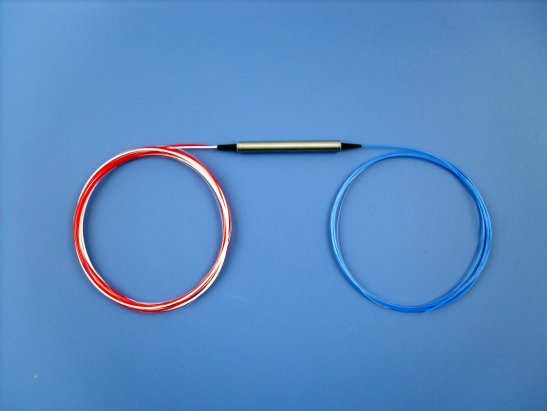 Optical Isolator
An optical isolator allows the transmission of light in only one direction. Its main purpose is to prevent unwanted feedback into a light source. The operation of the device is based on the principles of the Faraday effect, produced by the main component, the Faraday rotator. There, a magnetic field is applied to cause a rotation in polarization of the light, allowing travel in only one direction.

Optical Circulator
This special component is used to separate signals that travel in opposite directions on an optical fiber. There are three ports on a circulator, and light that enters one port will be emitted from the next. For example, light that enters port 1 will exit from port 2, while any light reflected back to port 2 will emit from port 3. In this way, a circulators can achieve bi-directional transmission over a single fiber, and thus they are frequently used in advanced communication systems and sensor applications.

Wavelength-Division Multiplexer
Wave length Division Multiplexers (WDMs) are components which multiplex (combines) multiple optical carrier signals onto a single optical fiber, using different wavelengths (or colors) of laser light. Doing so allows an increase of capacity, as well as multidirectional communications over a single fiber. Modern systems can handle up to 160 different signals, which are later separated by demultiplexers.

Fiber Assembly
Optical fibers are the basic component of fiber optic systems, and have many variations. A basic optical fiber is a flexible, transparent, fiber made of glass or plastic. It functions as a waveguide, and transmits light between the two ends of the fiber. Optical fibers are widely used in communications, as they can transmit longer distances and with higher bandwidths (data rates) when compared to metal wires.

Coupler
A fiber optic coupler is a common component that has multiple input or output fibers, while the other side has a single fiber. Light entering an input can be split into multiple outputs, and power distribution can be manipulated. Like-wise, multiple light signals entering the coupler can be fused into one output.

Fiber Array
Fiber arrays are simply arrays of fibers, which can be used in conjunction to connect multiple points.

Variable Optical Attenuator
Optical attenuators are device used to decrease the power of a light signal, either in a fiber or in free space. They are often used in fiber optic communications to test power level margins by reducing the signal in a calibrated amount, or to properly match transmitter and receiver levels.

Fiber Bragg Grating (FBG)
FBGs are a type of Bragg reflector, constructed in a segment of optic fiber which reflects particular wavelengths of light, but continues to transmit all others. It can thus be used as an optical filter, or wavelength specific reflector. It has applications in laser telecommunications and sensors, due to its special properties.